Black Swan Theatre’s production of ‘Lighthouse Girl’ will open in Albany in April for three shows before a two-week season in Perth. Hellie Turner’s play captures the essence of both Lighthouse Girl and Light Horse Boy and I can’t wait to see Fay’s story come to life on stage. Fay will be played by Daisy Coyle.

More details appeared in Saturday’s West Australian – between Green Day and Jerry Seinfield 😉 and can also be found on Black Swan Theatre’s website. Hope to see you at one of the shows… 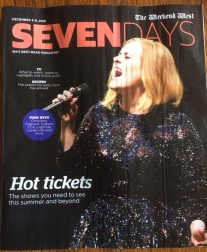 Book trailers are a wonderful way for readers to peek into a book and gain a quick understanding of what the story is about so they can then decide whether to buy/borrow and read.

James Foley and Fremantle Press created a cracker clip for my Light Horse Boy, and there are multiple clips linked to Lighthouse Girl (details below), however as yet, there are none for my other books. And so, my resolution for March, is to make at least one more book trailer…

There are two specific Lighthouse Girl clips on Youtube. I love the trailer that was created by Year 4 students at Rosalie Primary School in 2010 – great that it’s still out there…

Then there is my own first attempt at creating a trailer. It’s quite factual and a bit basic as far as clips go, but it gives a nice view of King George Sound and Breaksea Island.

There are many, many YouTube clips linked to the Little Girl Giant, a character which was inspired by the book, Lighthouse Girl (more details on earlier posts). Amongst the terrific clips below, is one posted by Tracey Timmins, the granddaughter of Fay (the lighthouse girl). It’s a crackly but close-up view of Fay as the Little Girl Giant at PIAF 2015. There’s also one that I posted, and others by people I don’t know.

The first waking up

Waking up to Edith Piaf

A lovely soundtrack version clip linked to Lighthouse Girl is by Caddy Cooper  Her clip features a song that she wrote, The Lighthouse Keeper’s Daughter which was inspired by Fay.

I hope that more clips of my books will appear soon. In the meantime, you might like to check out these clips by other WA authors and illustrators:

My Dead Bunny , The Last Viking Returns, Ned Kelly and the Green Sash,  A is For Australia, Zac and Mia,

This is just a sample, you will find more on most authors’ websites…

This morning I went to Great Southern Grammar’s Start of Year Assembly to donate copies of my historical novels, Lighthouse Girl and Light Horse Boy. The occasion?

GSG’s new boarding house has been named Breaksea House to honour Fay Catherine Howe, the ‘lighthouse girl’ who signalled to the departing Anzac nurses, troops and horses in 1914.

I was honoured to present signed copies of my books to boarding house student leaders; Emma Taylor and James Gonzales.

GSG has also purchased original artwork by illustrator, Brian Simmonds. The image appears on page 94 of Lighthouse Girl and shows Fay searching the Albany Advertiser for news about the troops in the Middle East. This lovely charcoal illustration will now grace the walls of the new boarding facility. I hope to see it when I visit for an informal book chat.

The full school assembly was a terrific occasion, welcoming the 2016 student leaders who then offered a badge to each Year One student, celebrating their new beginnings. 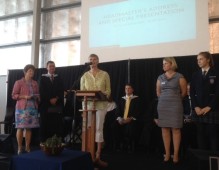 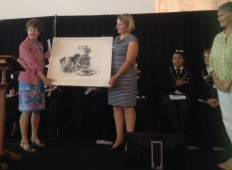 Fay’s story continues to touch a chord with readers, particularly those living in WA. I often wonder how Fay would feel to know that so many people remember her…

Inscription for the royal babes

The last day of the year: a time for reflection and forward planning.

Tucked in a holiday house in the hills behind Apollo with my family, its also a time for counting blessings; we’re all relatively healthy and we have homes to return to.

2015 has been a huge year for me with several highlights including:

Thank you to the schools and libraries across WA and beyond who hosted me in 2015. I believe teachers and librarians are unsung heroes of literacy. They open doors to learning, empathy and understanding for children and teenagers – the extent of their influence may not be known for years, but they enrich our community in immeasurable ways. I’d love to see teachers and librarians honoured and appreciated more in 2016.

In addition to the launch of The Shark Caller, for YA readers, I hope the illustrations for my picture book, Nanna’s Button Tin will soon be completed. The artwork so far is lovely.

My main aim at the moment is to complete my PhD research ready to submit before mid-year. Hopefully the next blog post will have an update on my progress.

I have school and library bookings in Albany, Busselton, Bunbury and Perth and plan to visit Sydney/Melbourne, Canberra and regional NSW. Please use the contact page if you would like me to come to your school/library. 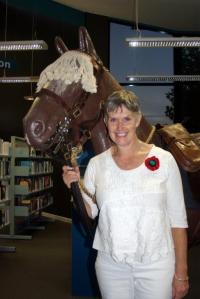 Last week, Susan Dalgleish and her team at the Shire of Capel Library organised a terrific Anzac event in conjunction with the Capel RSL. It was attended by a wide cross-section of the local population. Planning began last November with the amazing Lesley Jackes at an author event in Albany commemorating the Departure of the 1st AIF (see previous post).

Susan and the Capel Library staff are passionate about history and literacy. They created interesting displays and an inspirational program that began with local group, ‘The Wednesday Girls’ singing songs from the WW1 era to set the mood. Daniel McDonald from the 10th Light Horse arrived in full kit and brought along a life-size horse which was also kitted out with WW1 equipment. It’s always fascinating to see how much gear those strong Walers carried.

Members of the Capel RSL sub-branch including Vice President Alan Kelly Parker were on hand to answer questions and give introductions. We also heard a fascinating account of April Jenkins’ WW1 archaeological work in Jordan. I was very touched by Light Horse Boy book review readings by Jordi and Fraser Milner and also their mother, Naomi. Thanks guys.

The library boasted an impressive collection of WW1 postcards, books and mementos – many of which I coveted (especially those stirrups) !

Thanks to the library and RSL for a great event, and also for my gifts; a beautiful scarf, book and Anzac biscuits. Thanks to Georgie Carter for her help with book sales (way more than we expected) and to Tracey Doyle for hosting me so well at Capel Primary. Finally a big thank you to students Lily and Bradley for all your help. Meeting you both was a highlight!  Keep reading and writing… 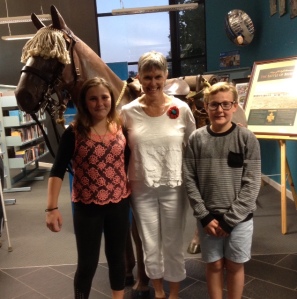 Moss Vale High School have a fantastic program called Kick off with Reading. From what I can understand, it’s kind of like a whole school bookgroup, with every student reading the same book. What a great concept! I will know more soon because the book they have chosen this year is my Light Horse Boy.

I’m feeling so honoured and can’t wait to meet the students and their forward-thinking teachers next week. Here is a teaser from The Southern Highland News.