Have you noticed people wearing purple poppies beside their red ones on Anzac Day?

Purple poppies commemorate the bravery and sacrifice of animals during wartime, and funds raised by sales of the pins helps The Australian War Animal memorial Organisation (AWAMO) establish memorials, train PTSD support dogs and care for retired animals that have served their country.

Thousands of horses, dogs and pigeons have accompanied Australian servicemen and women into battle while animal mascots including wallabies, cockatoos, cats and dogs have brought comfort to troops far from home.

Books honouring some of these animals include Anthony Hill’s comprehensive Animal Heroes and Maria Gill ‘s ANZAC Animals,  exploring the backstory of Australian and New Zealand war animals. Mark Wilson has created three picture books about war animals, including pigeon story, Flapper, VC.  Meanwhile, Torty and the Soldier by Jennifer Beck and Fifi Colston celebrates a tortoise that went to war. A  few other titles for teens and adults includes Horrie the War Dog , Bill the Bastard and Prince of Afghanistan. These are just a few titles, there are many more.

Lest we Forget these brave animals.

I feel as if I’ve been channelling Charles Dickens lately and was going to write this post last week, but my fractured foot and shoulder cause more tiredness than expected.

Four weeks ago, just before the Perth Writers Week, I slipped while walking Harry the dog on Albany’s Mount Clarence. It was an uneven trail, not hard bushwalking, however my right foot curled under and my left shoulder smashed into a tree. It hurt.

7am is peak dog-walking time but no one came by. I set Harry free and to his credit he resisted the urge to find bandicoots and stayed by my side. Good dog. I’d left my mobile phone at home and hubby was in Perth, so I balanced on a stick and hobbled half a km until kind neighbours found me and took me to hospital.

X-rays showed a complex lisfranc fracture . I had to abandon my Perth Writers Week sessions to spend the weekend with my foot raised waiting for surgery. The operation was scheduled for 26th February, the day the 2019 CBCA Notable Books are announced. Two of my books were eligible; In the Lamplight and The Dog with Seven Names.

I came out of surgery in a druggy haze to learn that not one, but both books had been listed. That certainly helped take my mind of the foot! The next morning, still feeling groggy I checked my emails and saw something about news being embargoed? After a fuzzy reread, I learnt that The Dog with Seven Names had just been shortlisted for the 2019 NSW Premier’s Literary Awards . It was listed with five other titles in the Patricia Wrightson category. The best of times, the worst of times … 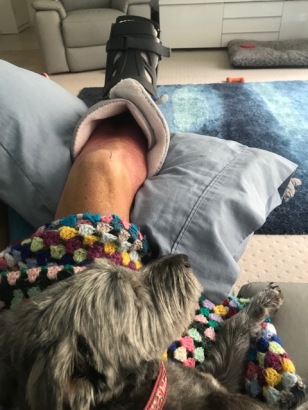 Fast forward three weeks, post op. My two weeks of immobile ‘toes above nose’ resting is complete and I’m now able to move about with a little mobility scooter. Still no weight-bearing for three more weeks, however I’m allowed to shower sans boot, which is a highlight of each day. I’ve had to rearrange work commitments but nine weeks after the accident at the end of April, I’ll be flying to Sydney for the NSW Awards announcements – winner not known until the night. I’ll then fly on to Launceston for a CBCA Tasmania organised mini speaking tour.

Thank you to those who’ve sent get well wishes and helped in practical ways (dog walking/meals). I’m trawling back through messages but can only be at my desk for short periods. If I’ve missed an email from you or been slow to reply, this is the reason why. x 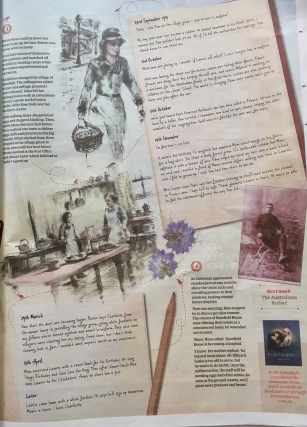 Thank you teachers, librarians, booksellers, readers and the teams at Fremantle Press, Penguin Random House, Black Swan Theatre, the Literature Centre and CBCA for your support throughout 2018. It’s certainly been an eventful year, with the publication of two new books, In the Lamplight and The Dog with Seven Names, a UK launch and book tour, Candlewick’s US release of Nanna’s Button Tin, school visits across WA and NSW, and the regional WA tour of Black Swan Theatre’s wonderful adaptation The Lighthouse Girl. 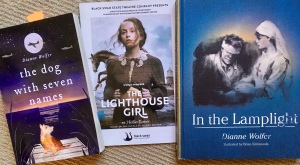 Other 2018 highlights include ASA mentoring the super talented Amelia Mellor, speaking at the National ALEA/AATE Conference, Write Around the Murray and the CBCA NSW Kids Bookweek event. I love being part of the friendly and inclusive children’s literature community. Special thanks to the SCBWI West team for all that you do to support creative spirits.

2019 looks like being another exciting year. More about that in a few weeks. In the meantime I’ll be enjoying a quiet family Christmas at home, with plenty of beach-time, reading and the odd glass of bubbles. I’m also happily writing something new. Stay safe and thank you for helping to make 2018 a good year.

Corryong and the Upper Murray region is renowned for courageous and skilful horse riders. A statue in the main street honours Banjo Patterson’s ‘Man from Snowy River’, the grave of Jack Riley (claimed to be the legendary ‘man’) lies on a hill above the town and a bush festival is held each April. Last week I was fortunate to visit Corryong College and meet the Year 5 and 6 students who have been studying Light Horse Boy and researching the WWI light horse men with links to their town.

Each student has researched one of 57 WWI soldiers from the Corryong region and this research has been compiled into an historical publication ‘Light Horsemen of the Upper Murray’. The book is a valuable reference with evocative photographs and fascinating personal details which bring history to life. Through the process, some families have rediscovered previously forgotten connections with great great uncles and grandfathers. The project has been led by teacher and military enthusiast Stephen Learmonth and Georgia Dally. I was honoured to be welcomed into Corryong College to share details of my own research and to compare stories linked to WWI soldiers, their faithful Walers and other animal mascots.  More about the latter mascots in my next post…

The visit came about after I received a letter from Dr Honor Auchinleck, daughter of Elyne Mitchell (The Silver Brumby) and granddaughter of General Sir Henry George (Harry) Chauvel. In this letter, Honor described the children’s project and sent kind feedback regarding Light Horse Boy. After my presentation, and Honor’s commemorative address to the students, we enjoyed lunch at a local café. More also about that and the Elyne Mitchell Writing Award in a following post. In the meantime, thank you, Stephen, Honor, staff and Year 5/6 students. It was wonderful meeting you.

May your day be filled with button fun …

Just in time for Remembrance Day we have compiled a list of fiction and non-fiction reading about World War One. It comprises picture books, some material for middle grade and also resources for high school. It is an excellent starter for a school library collection. We hope you find this useful and as always we welcome suggestions for additions to the lists. World War One Resources